A Bit about Bamfield 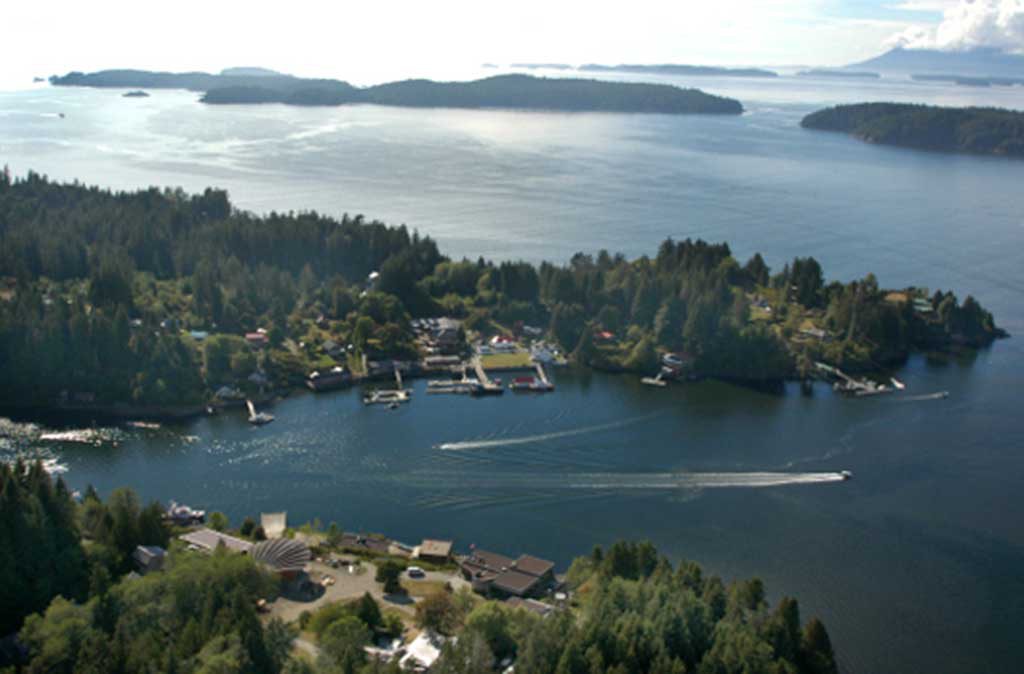 Photo: Colin Bates
We Bamfielders eagerly await the thrice-weekly Lady Rose ferry that brings mail and groceries. The freshest produce and not-too-old newspapers are quickly snapped up from the General Store. After an exchange of gossip, everyone scurries home to their solitudes. Occasional evenings are spent in community meetings (our community of two-hundred, is run by twenty-three committees) where topics such as…Do we want the sixty mile road to Port Alberni (the closest town) paved? Who will water the boardwalk flower boxes? And should the newcomer, Mrs. X, be invited to contribute a panel to the annual Red Cross quilt? 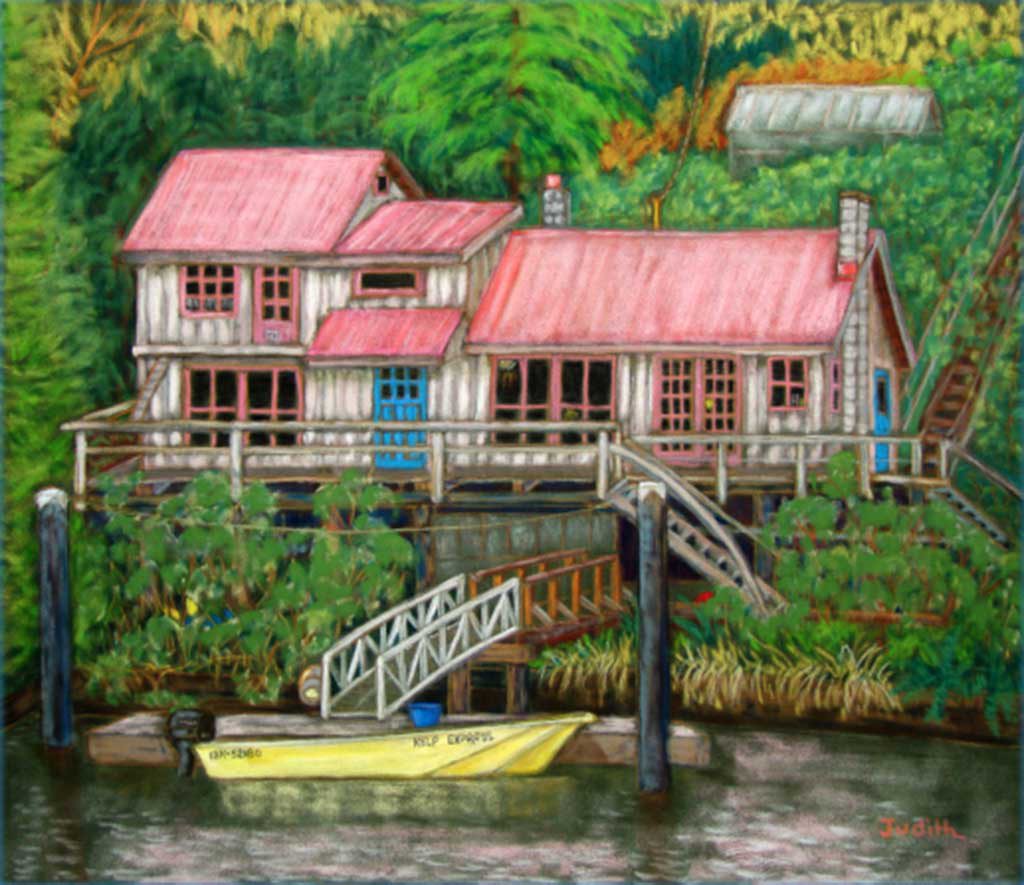 Louis & Rae’s Port Desire home Pastel painting by Bamfield artist Judith Phillips
Most Bamfield disputes are resolved by an individual’s action. Trees are felled to limit trail access. Survey stakes are moved to accommodate one’s house. However, one thorn persists: A road linking east and west Bamfield. Those living on the east side can drive to their homes but need a boat to get the mail and, earlier, to visit the hospital or go to school. Those on the west side must transfer their groceries and such to a boat. So a road link would benefit everyone.The problem that divides the community is “The Quaintness Factor”. The joke is if you needed rescuing by the Coast Guard (west side) you had to declare your position on the road issue before they would respond. Things came to a head when two young ladies collided on the west side lane. The one in favour of a road link drove over and accidentally killed the dog of the other that was against a road link. The scene of the two women, the dead dog and a car on the west side lane said it all.
“The Judy Ann rode high, announcing a poor catch. Gaz knew the salmon fishery was doomed.” From Cedar, Salmon and Weed. 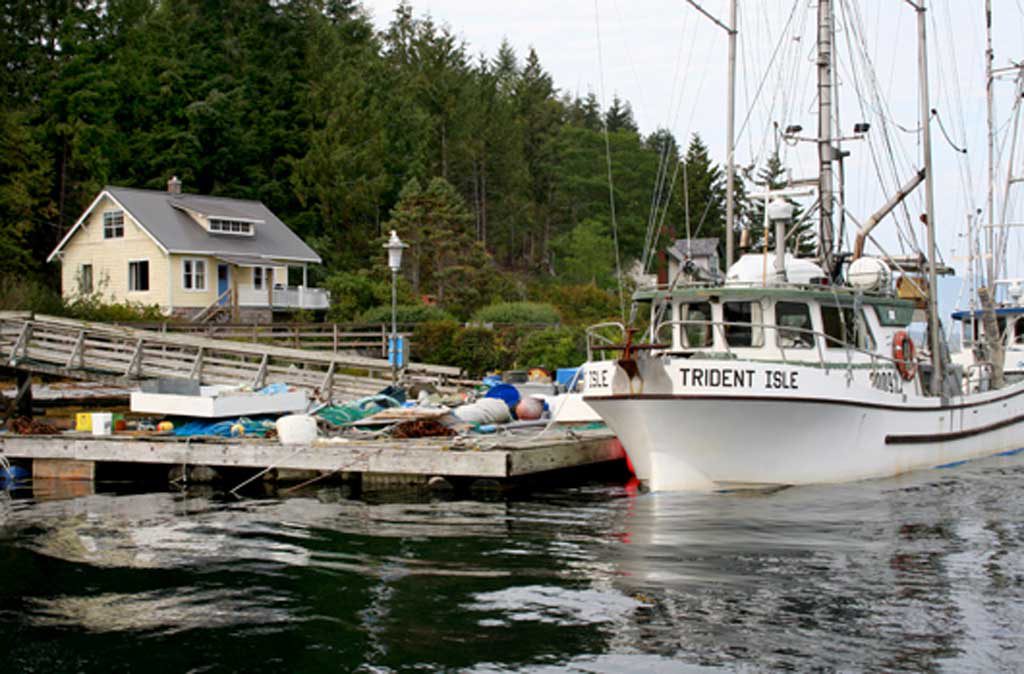 My neighbours are well versed in rain forest survival. And most harbor a skill from an earlier life that may be called upon in time of need: seamstress, choreographer, nurse, leather worker, diesel mechanic, caterer, piano tuner, and so on. Religion was never big in Bamfield, and recently our few practitioners were abandoned by the church. But Bamfield weddings and memorial services and wakes continue to be creative and very popular.

Bamfield is rife with rumours and half-truths. The town drunk, Shorty, was discovered drowned, clutching two cases of beer, under the boardwalk. This led disgruntled wives to burn down the village pub, leaving Bamfield dry for two decades. The re-establishment of the pub was hotly contested by certain families. These adversaries were excluded from the new pub’s mural depicting Bamfield life.
“A clicking of a deadbolt announced the Bamfield General Store’s opening. Mr. Meadows, tidy as a tick, dumped his morning compost on the rocky shore.” From Cedar, Salmon and Weed. 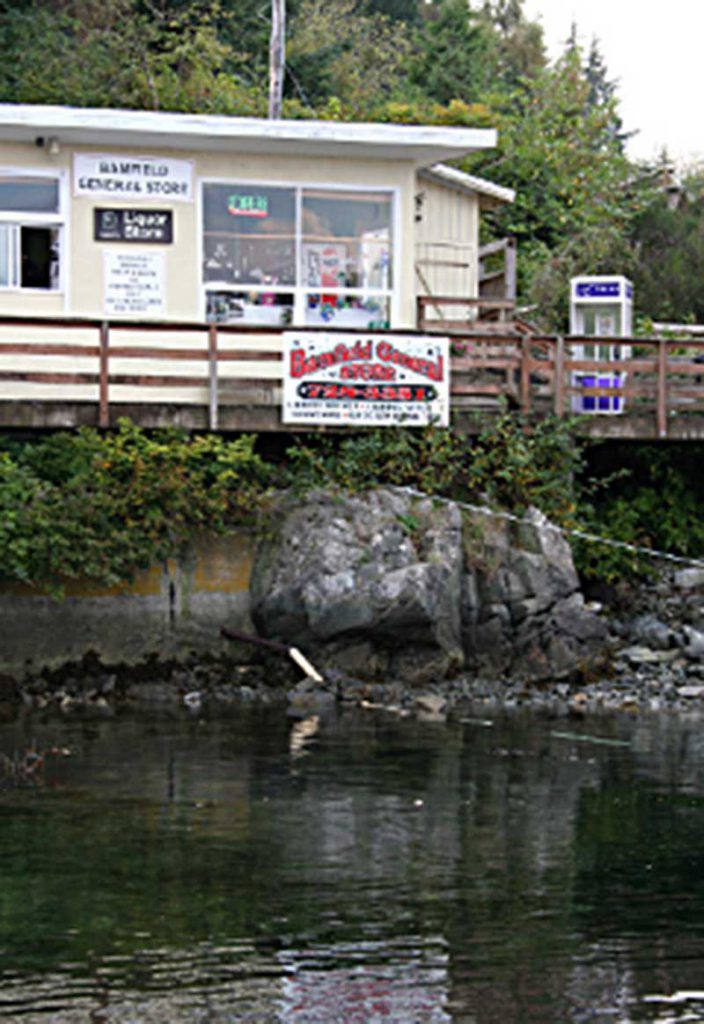