19 Jan 2016| Comment
Sylvia Reynolds sent this lovely note to Louis at the end of November (Your webmaster has been rather negligent of late, but promises to be more active in the coming months – stay tuned!) and graciously agreed that we could share it here. So much fun to hear of readers’ experiences of the book!). 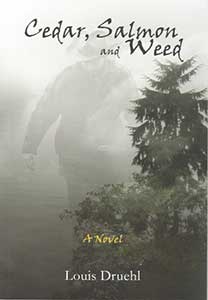 I know the expression to never judge a book by its cover, but I really like the atmospheric picture and it does represent the content! [Ed. Note: Kudos go to Hamo Djoboulian for creating the great cover image! (See image to right.)]

With your descriptions, I could visualize the coastline and vegetation around Bamfield, but was never there for long enough to get to know the more permanent residents. I thought Gaz and the other main characters in your book strong and interesting. I have a happy memory of being with the first group of students to stay in the old cable station. We slept together in a large room and I seem to remember ghost stories being told before we settled off – probably by Dan Pace who is still a friend of ours.

Coming from Ireland as a rather innocent and politically ignorant 21 year old Vancouver was an exciting place to be in the late 1960s and early 1970s. Apart from becoming more politically aware (Vietnam was always in the news), I learned about cannabis! My fellow housemates and I tried to grow it at the bottom of the garden of our Burnaby house, but it was a wet year and the plants did not thrive. Years later, it was I who showed our children cannabis grown in our Dublin garden, from bird seed – as part of my work on ‘alien’ plants.