26 Nov 2015 | 1 Comment
A special treat today! A story passed along to us from Doug Kittle. Bob Lee and Louis were graduate students together at UBC. At the time of the story below, Bob Lee worked with Canada’s National Museum of Nature as their seaweed expert. Bob hired people to help collect collect seaweeds in the high arctic (this required SCUBA diving), including Doug Kittle (author of the recollections below), Ron Long (professional photographer for SFU – now retired), and the late John Boom (the inspiration for the character Gaz in Cedar, Salmon and Weed).  Thanks for sharing, Doug!

I made two trips to the high arctic with Bob Lee.  The first one in the early 70’s with Ron Long as diving partner and photographer.  That trip was a wet suit expedition in water just below 0 degrees C.  It was marked by the constant complaints from Ron about this or about that.  Bob Lee actually wrote a short poem during the trip titled “Bitch, Bitch, Bitch”.

The second trip was with John and we started out in Resolute Bay on Cornwallis Island at about 74 degrees north.  There we met up with the helicopter – a bright red Sikorsky with a big passenger bay that used to run on a DC-3 motor but was converted to a smaller jet engine for our trip.  You could change into the dry suits inside.

We did a lot of flying looking for leads in the ice where we could dive and collect specimens for Bob.  Eventually we travelled to Eureka on Ellesmere Island at about 79 degrees north.  From there we made daily trips, depending on weather, both east to the east coast of Ellesmere where we could see Greenland, and west towards Axel Heiberg Island.

One day trip we headed over the ocean between Axel Heiberg and Ellesmere Island looking for open water.  It must have been a bad ice year because on that day we never spotted open water.  At lunch time we set down on the ice next to some exposed rocks which stood out because of their colour.  A good place to sit in the sun and eat lunch.

Early in the day while still in Eureka Bob Lee asked John to get some lunch together for the four of us on the chopper.  So, once we set down at noon, he retrieved the bag of lunch.

When John took out the cans of asparagus tips and some dry pilot biscuits Bob Lee’s eyebrows shot up and he gave Boomer a “what-the-hell-is-this?” look.  Suffice to say the rest of us resorted to the chocolate bars we always carried for snacks.  I clearly remember John opening up a can with his knife leaving a jagged lid still attached while he drained the liquid down his throat, then picking the individual pieces of asparagus out of the can with the tip of his knife which he relished.

After that, he was never asked to make lunch.

John was a great travel companion, never surly or bitching the way Ron Long had done on our previous expedition.  We eventually made it to the north end of Ellesmere Island at Cape Columbia where we did find open water near some shore fast ice.  That day we dove in 80 feet of water underneath a bunch of ice that was 50 feet thick.  One of my most interesting experiences at 83 degrees north.

Artistic photographer, Ken Miner, records Cedar’s author and his wife Rae with his 113-years-old camera, Century View. They had to hold still for 30 seconds. “I didn’t know half a minute was so long  . . .  I think I blinked a few times,” said Louis.

A driving force in the creation of Cedar, Salmon and Weed was the impact of John Boom’s death on me. I was devastated, angered. After striking out, every which way, I settled on this novel, setting John, in the form of Gaz, as the protagonist. As the story, the fiction grew, Gaz had the life, death deprived John of.  He got the girl; his house was finished, and he may well see grandchildren. This made me feel good.

28 May 2015 | Comment
Ben’s rescue of Gaz and Heidi from Folger Island (Cedar, Salmon and Weed, p.31) on a dark and stormy night was inspired by a similar Folger rescue by Seaman Martin Charles (Hereditary Chief of the Nitinat Band, over thirty years service at the Bamfield Life Saving Station and recipient of the Medal of Bravery). Martin was further honoured by having a Hero Class Mid-Shore Patrol Vessel named after him: CCGS M Charles M.B. This event, at Centennial Pier, Port Alberni, on 20 May 2015, was witnessed by a few hundred guests, half it seemed who were related to Martin. His granddaughter (self-declared “best granddaughter”) Sheila Charles christened the boat. Everyone seemed intent on establishing their connection to this larger than life man and I would be remiss if I didn’t note that we have spent the last forty years living in the Martin family Port Desire home.
Post Categories:  events  |  History
Post Tags: 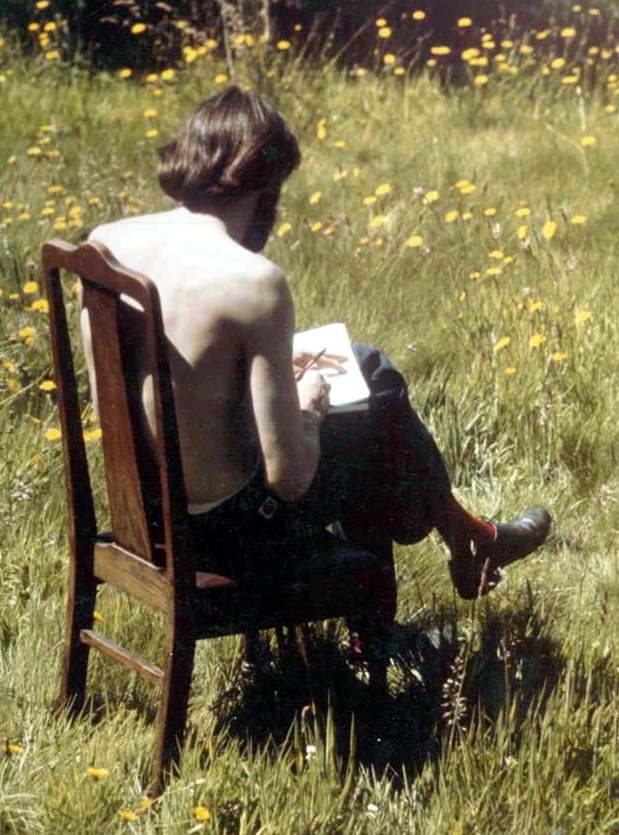 This is Louis Druehl, the author of Cedar Salmon and Weed, soaking up Bamfield sunshine, in 1972.